This page is a work in progress, but It will eventually have all the public events I’m booked for. It’s likely to be as useful for me as for anyone trying to see a demonstration day. 🙂

September 2018
Perth Royal show first place. Category: Class 97 Celebrating Bees
(Made from a sugar medium. Wooden skewers, boards and a minimum amount of wire may be used for support. Base/presentation board or drape to fit within a 40cm square).

Demo at Northshore branch of the Cake Decorators Association of WA.

Macaron demo At the Swan Districts branch of the Cake Decorators Association of WA.

May 2018
Tutorials in the Australian Sugarcraft Magazine

April 2018
Recipes and tutorials published in Australian Sugarcraft Magazine
How to make parchment piping bags, how to make and work with royal icing for piping, flooding and general decorating. non spreading biscuit dough, how to decorate biscuits with fondant,  mirror glazing cakes

January -March 2018
Season three of the Great Australian Bake Off aired.
I was a contestant, I made it to episode 7 of 10. 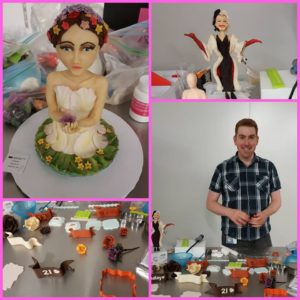 17th-20th August 2017
19th National Seminar for the Australian National Cake Decorator’s Assosciation
Presented a half day sculpting with modelling chocolate on an armature workshop at the biennial National seminar hosted by in 2017 by the CDAWA. 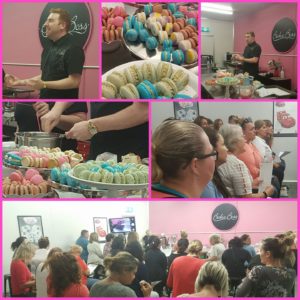 May 2017
Filming the Great Australian Bake Off.
was aired January – March of 2018