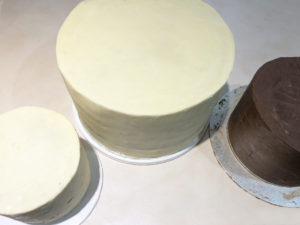 I love white chocolate ganache but I usually find it way too sweet. I found that using sour cream instead and adding some apple cider vinegar and salt gives an almost cheesecake-like flavour to my ganache and drops the sweetness out while boosting the flavour. This is by far my most favourite filling and has become a go-to for covering and filling cakes. The flavour is so well balanced that it is even fine to use under fondant, where regular white chocolate ganache would be too sweet and I have used it to fill and cover white chocolate mud cake.

Or for a smaller amount: 600g White chocolate and 200g of sour cream, 1 tsp of apple cider vinegar and a pinch of fine salt. 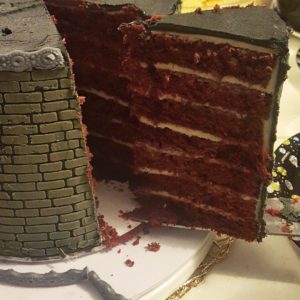 In a large microwave-safe bowl place one teaspoon of salt, the white chocolate, sour cream, and vinegar. Heat in microwave in one-minute bursts, stirring between bursts until combined. (should take roughly 2 and a half minutes in total). Once fully combined pour into large sheet pan and place in fridge or freezer and cool until the correct consistency is reached. test by poking at a corner of the pan with a palette knife.

The most important tip when making ganache is not to overheat it. Take time to melt the chocolate into cream slowly.

Once combined, do not mix, stir or disturb the ganache until it is nearly set to the right consistency. The aim is for the consistency to be the same as peanut butter.

The only time I have ever split ganache is if I overheat the chocolate, or stir it before it has set the first time.

Something about the chemistry of ganache changes after you allow it to set, or nearly set.
I find that if I let it set to the right consistency or fully set up before I use it, then I can then reheat it gently to get it workable without any issues and mix it and work with it as much as I want.
However, if I stir it when it is only half way to being set, right after making it, then the oils will split from the mixture.

Comments have been disabled.